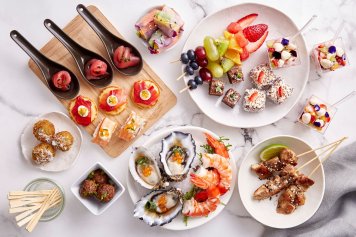 You can’t picture a gallery opening or some formal gathering without picturing Nicholas Catering cocktail canapés in Sydney. They’re there in all their deliciousness, and are prime examples of “good things come in little packages”. But what are cocktail canapés? Do all small snacks count?

Fun Fact: Canapé actually means couch in French. The word was actually applied to food when a chef made a portion of hors d’oeuvre that looked as if someone was “sitting on a couch”. The name might have originated in France, but cocktail canapés have definitely become a staple amongst non-Europeans.

Technically they’re the same. Cocktail canapés are merely a subset of hors d’oeuvre. If you want to get into it though, hors d’oeuvre literally means “outside work”. So they’re snacks that are served either hot or cold and primarily before a major meal. Canapés are tiny but are the main dish at a cocktail event. As to their difference, perhaps it depends on the occasion.

Good canapés have 4 major parts. A base, made from some pastry like crackers, a spread which is followed by toppings. The garnish is the final, and typically most artistic part of the canapé. This is that standard formula, but it can be changed a bit. The end goal is to create an aesthetically pleasing snack that can be eaten in one or two bites – without requiring cutlery.

How Many Cocktail Canapés Per Guest?

Knowing how much to prepare can solve budgetary issues. The amount of canapés you’ll need depends on the nature of the event. Art exhibitions, for example, don’t last that long, so you need as many per guest as you would need at a wedding event. The catering canapés rule of thump is to provide between 4 to 6 canapés per person in the first hour of the event, and about 2 to 4 in subsequent hours.

If you’re serving canapés as a precursor to a meal, you’ll need fewer. Whereas a cocktails canapés only event would require significantly more. Whatever your estimate is, go a little bit over because you can’t have too many canapés at an event.